The seat of the Municipal Library is located in the historical centre inside the former Church and the convent of Santa Chiara, between Via Ignazio Corleo and Via La Rocca. The convent was built around 1553, on the site of an ancient monastery of the Basilian Fathers. In 1721 the adjoining church was embellished with paintings and stuccoes of considerable quality, made by the painter Antonino Ardizzolo from Palermo but native of Salemi with the help of the plasterers Giovanni and Giacomo Messina from Partanna. The complex was afterwards totally remodeled to be used as the seat of the current municipal library and the municipal historical archive. Almost nothing remains of the original church and its decorations. The facade of the church is bordered by large pilasters, resting on high pedestals. A very interesting aspect to point out is the Ionian parasta located in the north-west corner which is enriched by  grooves and also a molded base and capital. In the center, there is a large portal architraved and bordered by pilasters whose capitals are decorated  with spirals and leaves. Inside, on the high altar, there was a canvas of Santa Chiara that stretches the Monstrance against the Muslims, the work of Giacinto Platania, now preserved in the church of Sant’Agostino. The copy of the famous painting by Rubens “The Descent from the Cross”, as well as the canvas depicting the Holy Family, attributed to the painter Domenico La Bruna from Trapani, are now kept in the church of the Collegio. The Library has an heritage of about 113,000 volumes of enormous prestige, cultural, historical and sociological value. Among these 53 manuscripts, 78 sixteenth-century and  216 seventeenth-century editionsand several are very rare valuable works. 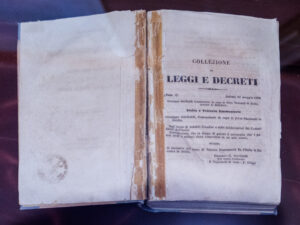